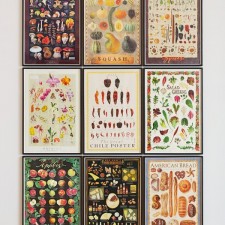 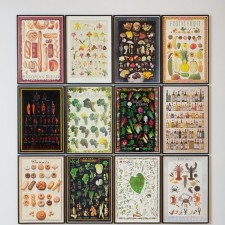 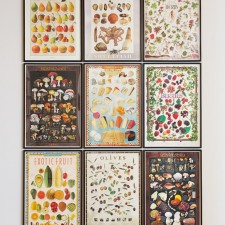 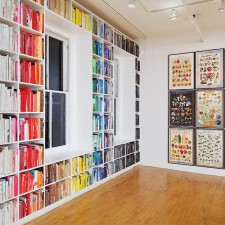 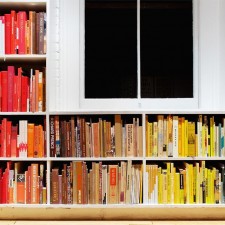 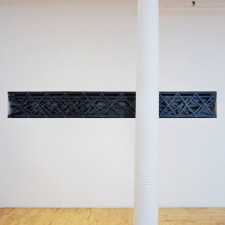 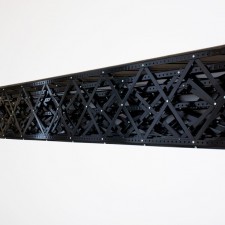 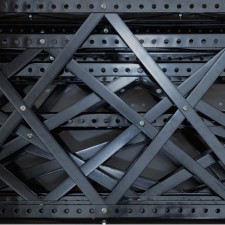 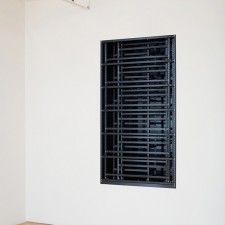 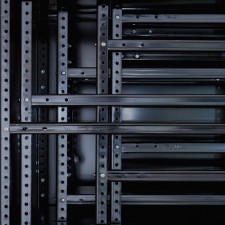 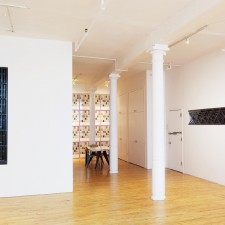 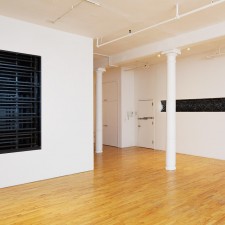 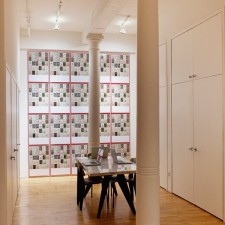 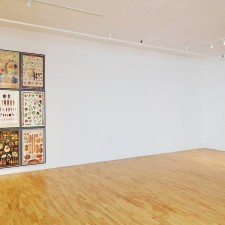 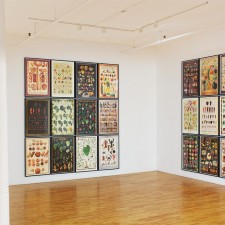 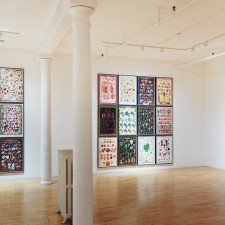 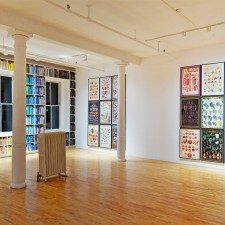 Clifton Benevento is pleased to announce its first exhibition by Zak Kitnick, a show consisting of two related yet distinct bodies of work that examine the boundaries between art, décor, and utility. Looking at the intersections of commodity production and architectural space alongside that of sculpture and design, Kitnick’s work explores how these parallel worlds borrow from each other equally, acquiring and defusing each other’s potential.

In a series of work entitled Compendium, Kitnick begins with decorative food posters – each one displaying a family of food (items of consumption: peppers, breads, spices, mushrooms) – subsequently framing and arranging them into larger groups. Individually, these posters offer almost encyclopedic information, and at the same time, that information is nearly impenetrable, consumed as a single image. Their destiny is to hang on the walls of restaurants and pantries as decoration. Culled primarily from online specialty stores, alone, each poster is defined by the items depicted, but presented as part of a larger constellation, the structure, the systems of organization and presentation overwhelmingly become the subject matter. Riffing on modernist precedents, each poster becomes part of a strange grid which foregrounds similarity and undercuts difference. In Kitnick’s work, making these distinct typologies interact with each other, and multiplying their information, the ostensible content of the posters soon short-circuits giving rise to a series of odd connections—a glut of delirious information.

Where conceptual art invested itself in what has been called the “aesthetics of administration,” Kitnick explores what he calls the aesthetics of information. By starting with these posters (information and image), Kitnick looks at conceptual arts interest in décor as at once the antithesis and inevitability of art. The work goes on to ask, if it is the fate of so much art to end up as mere decoration, is it possible, by starting with decorative origins, to escape this fate? Information here is no longer simply digits and files; its very organizing system has become an aesthetic itself—a form of decoration.

In two wallbound sculptures, Kitnick builds industrial shelving units, those typically used to hold stock in warehouses, into each other to foreclose the possibility of their function, forming a kind of amped-up organizational system no longer capable of use.  The content meant to be held on these shelves is absent, banished across the room to the realm of image and information—the new profit sector. Without this content, the steel shelving itself becomes a thing that is designed, manufactured, transported and sold. In its production and use, it rarely leaves the realm of manufacturing, but as the industrial aesthetic, a sort of form-follows-function design is increasingly bastardized into a style, it, too, is increasingly integrated into the residential.  Underscoring issues of form while negating issues of function, the sculptures appear utilitarian without being utilitarian, they have a ‘minimal aesthetic’ without being minimal.

Highlighting a contemporary situation of precarious objecthood, these sculptures have been built into the walls of the gallery, presenting themselves more as architectural hardware than autonomous sculptures. Embedded where wires or plumbing might be, these sculptures both court the functional and evacuate it at once, exposing the labor and theatre inherent in our designed world. In their presentation (centered on the wall) and concealment (inlaid in the wall), there is a simultaneous blocking and offering up to vision. Playing on terms of image and structure, surface and support, Kitnick’s work comments on the divided, neither-here-nor-there status of sculpture today—and of a system of objects more generally. A long wall of arranged books, a grid of posters, an enclosed shelf, each point toward other modes of classification.

Born in 1984, Zak Kitnick received a B.A. from Bard College; he currently lives and works in Brooklyn, NY.  His work has been exhibited in several New York institutions including PS1/MoMA,  Artists Space, Socrates Sculpture Park and Cleopatra’s.

The exhibition will run from September 10 – November 5, 2011; opening reception is Saturday, September 10 from 4-7pm. The gallery is located at 515 Broadway between Spring and Broome streets, New York, NY.  Tuesday-Saturday,11am – 6pm. For more information please contact Michael at mc@cliftonbenevento.com.