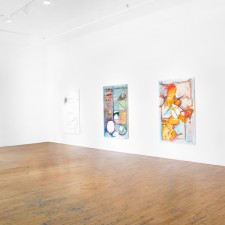 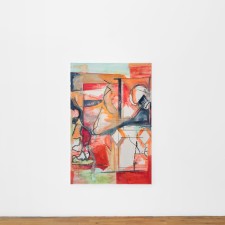 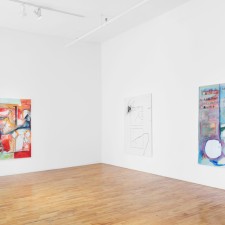 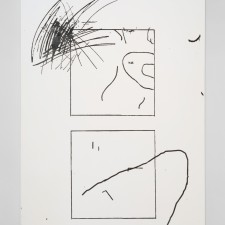 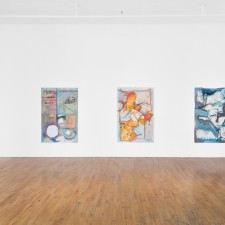 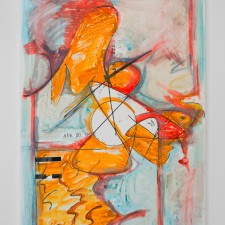 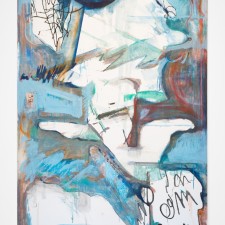 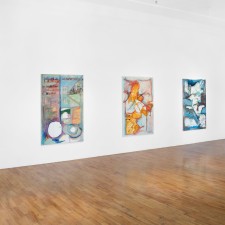 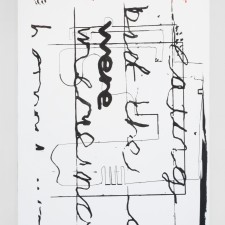 WHERE, Anyone Can Improve Their Own Handwriting by Jason Alster (still), Urban and Jellen completed test, 2016, Silkscreen ink on linen over panel, 45 x 30 inches 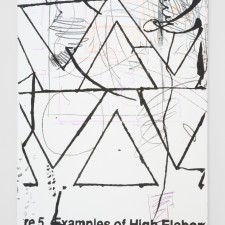 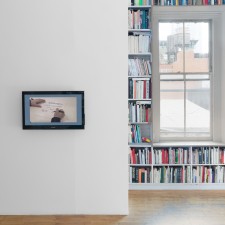 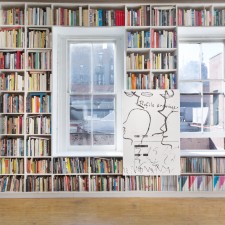 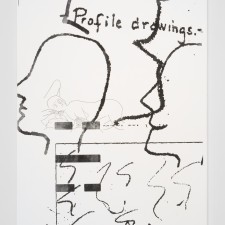 Clifton Benevento is pleased to present “Thinking Creatively With Pictures”, a solo exhibition of paintings and a video by New York based artist Sofia Leiby. In her newest body of work, Leiby mines the rich history of “projective drawing tests”, graphic assessments originating in Gestalt psychology, to self-reflexively address the relationship between mark-making and subjectivity.

Leiby’s research in graphology led her to the field of psychometrics, or the theory and techniques of psychological assessment, and the history of the graphic test. Used in psychology, these tests present graphic stimuli usually organized in a grid or box that the test-taker responds to with a drawing and a title. The test-taker is then analyzed based on her drawing performance, according to criteria such as drawing time, the order of the squares drawn, refusing to draw, the size and content of the drawings, crossing of the borders of the squares, etc. (artistic ability is not usually considered). Upon completion, the psychoanalyst can deduce personality and diagnose possible psychological disorders. Such criteria is recognized as subjective but still ‘scored’ according to a very particular set of rules. Similar tests are also used to measure gender-role identification, creativity and imagination in corporate hiring and even as a prerequisite exam to join the Italian Armed Forces (The Wartegg Test). The Torrance Test for Creative Thinking, which includes graphic completion components, is widely used today to identify gifted children across the U.S, although there is still a lack of research surrounding most graphic completion tests.

Leiby has indexed the graphic “stimuli” from The Wartegg Test (Eugene Wartegg, 1939), The Medallion Test (W.N. de Vletter, 1942), the Torrance Test for Creative Thinking (Ellis Paul Torrance, 1958), The Test for Creative Thinking-Drawing Production (Urban & Jellen, 1995), the Franck Drawing Completion Test (Franck & Rosen, 1949), and other related exams as well as completed specimens. Using silkscreen, she collages these elements that serve as the compositional framework for abstract paintings both colorful and monochromatic.  A new video, ‘How to Improve Your Handwriting’ uses humor to underscore the connection between personality and gesture.

Upon meeting artists Wassily Kandinsky and Paul Klee in the 1920s, Wartegg took inspiration from Kandinsky’s graphic theories in ‘Point and Line to Plane’ when developing the stimuli of his own graphic test.   In observing parallels between the field of psychometrics, art theory and criticism, Leiby brings the graphic marks relegated to psychoanalysis full circle back to the realm of fine art; working within her own test-taking environment, Leiby’s paintings function as self-assessments of the personality and creativity of the artist.

Sofia Leiby (b. St. Paul, MN, 1989) is an artist based in New York. She graduated from the School of the Art Institute of Chicago in 2011. Recent solo exhibitions include Levy Delval (Brussels) East Hampton Shed (East Hampton, NY) and Michael Jon Gallery (Miami) in 2015, and Devening Projects (Chicago) in 2013. Group exhibitions include 247365 (NYC), Joe Sheftel (NYC), Nicelle Beauchene Gallery (NYC), Loyal Gallery (Stockholm) and Future Gallery (Berlin) in 2015, and Galerie Jacob Bjorn (Aarhus, Denmark), LVL3 Gallery (Chicago), and Circuit12 Contemporary (Dallas, TX) in 2014.   She also has contributed criticism to Rhizome.org, Bad at Sports, and WOW HUH, among others.