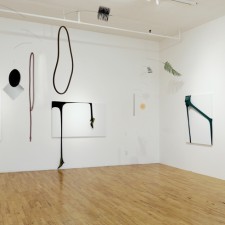 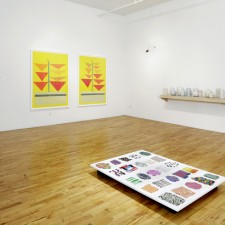 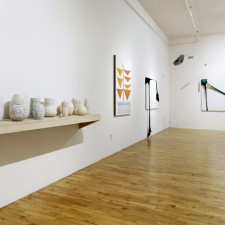 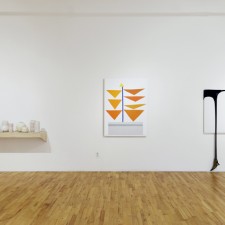 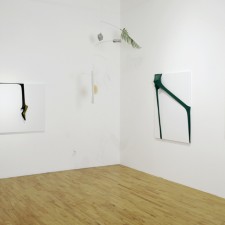 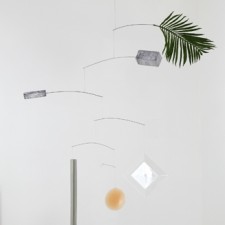 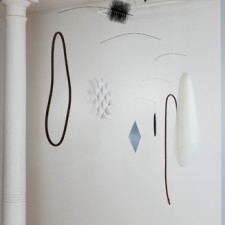 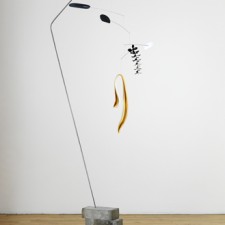 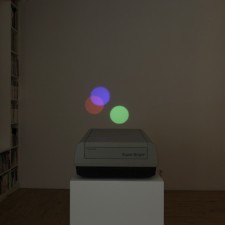 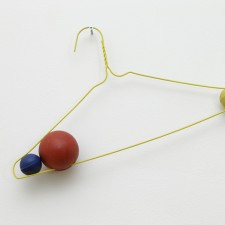 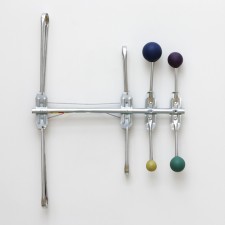 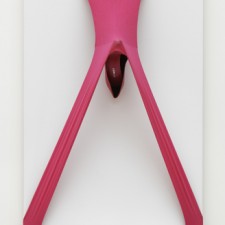 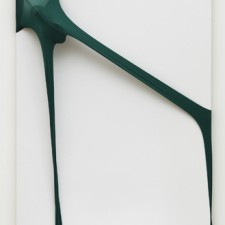 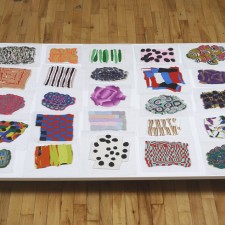 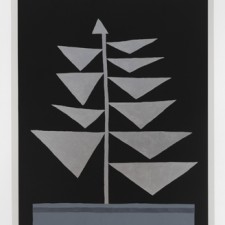 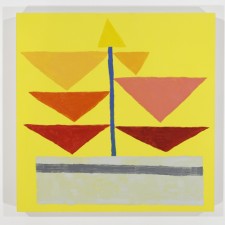 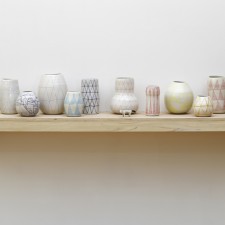 The work of six artists – Polly Apfelbaum, Peter Coffin, Shio Kusaka, Hanna Sandin, Martin Soto Climent and Jonas Wood – come together to evoke a contemporary mash-up of American artist Alexander Calder under his quote ‘Not Extractions but Abstractions’. Presented side-by-side their works obliquely summon Calder’s use of reductive forms, his serious yet playful endeavors with materials as well as his development of kinetic sculpture. Like any quirky mash-up, this assembly proposes new ideas and forms in transformative contrast to the original source.

With a charm and sincerity akin to the wire, rubber and cloth constructions of Cirque Calder, Shio Kusaka presents two styles of ceramic vessels. Frenetic lines burrow along the negative space of her ‘free-style carvings’. Although abstract in form, one can distinguish ladders, flags or multi-tiered platforms among Kusaka’s etched silhouettes. In ‘triangles’, painted geometric shapes spool around the glazed neutral surfaces of her pots like gossamer banners.

Hanna Sandin’s sculptures reference syntactical structures via the form of the mobile. Her titles are configured as left-to-right sentences, or thought diagrams, chosen from multiple iterations. Elements of her mobiles – found and recognizable – surrender to abstraction as three-dimensional objects are flattened into compositions of line, form and color. In Sandin’s sculptures, taxonomy comes undone, though formally and literally there is a balance of objects. Under the name SAMMA (which is Swedish for ‘same), Sandin also designs and produces a commercial range of jewelry. And although Calder considered his ‘sculptural adornments’ as another aspect of his art, several items from the SAMMA collection will be presented in contrast to Sandin’s sculptures.

Through the use of reductive visual codes, Jonas Wood’s New Plants simultaneously recall potted plants and abstract sculptures. Simplified shapes and colors seem to hover magnetically along a solid vertical line, or stalk, to form his plant compositions. The line or ‘formal backbone’ as Wood refers to it, is a constant that allows him to explore perspective and repetition – much like Calder, ‘through suspension of space’.

In ‘Flying Colors of Mexico’, a project commissioned by Braniff Airways to paint an aircraft in honor of Mexico, Alexander Calder altered his signature color palate to reflect that of the Mexican Flag. In conversational turnaround, Mexican artist Martin Soto Climent contributes work from ‘Tropical Compositions’, a series of sculptures started in 2008 that playfully subverts his typically subdued palate for ‘colors that might be expected of Latin artists’.

Like Calder, the work of Polly Apfelbaum reveals a daring approach to experimentation with materials that yield unlikely art forms and hybridized epithets such as ‘drawings in space’ and ‘fallen paintings’. Her latest series of work, ‘Feely Feeley Feelies’, makes use of various nondrying clay mediums in commercial off-the-shelf colors. Resembling small abstract paintings with a materiality suggestive of sculpture, they reside atop flat surfaces and in the space where painting, drawing and sculpture converge.

Rounding out the exhibition is ‘RGB’, a video projection by Peter Coffin. Using the basic image generating elements of a CRT projector, three individual circular lights in Red, Green and Blue float along the wall in a visual lullaby, occasionally overlapping to produce flickers of cyan, magenta and yellow.

The first iteration of ‘Not Extractions, but Abstractions’ was curated by Michael Clifton and presented earlier this year at Karma International in Zurich with artists Shio Kusaka, Hanna Sandin and Jonas Wood. Part 2 expands on the themes with the inclusion of additional artists Polly Apfelbaum, Peter Coffin and Martin Soto Climent.