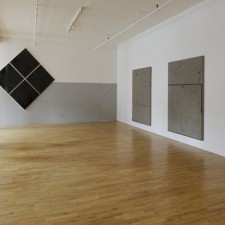 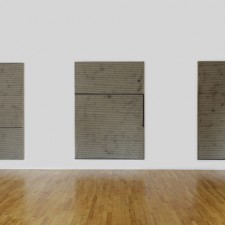 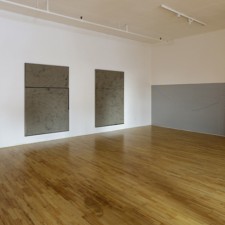 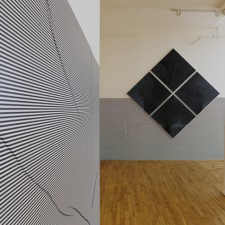 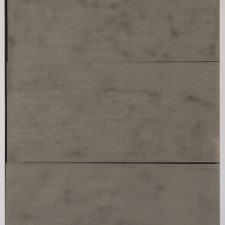 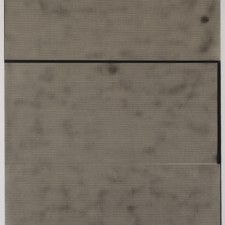 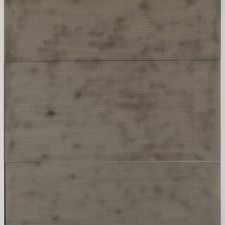 2009
Gruppenausstellung, Autocenter, Berlin
Nothing I to say and I am Saying it, Kunstverein Freiburg, Germany
If the Dogs are Barking, Artist’s Space, New York, NY
Maximal Minimal, Primo Piano, Lugano, Switzerland
From the collection of White Columns, New York, NY
Group Show, Cave, Detroit, MI
This is not the Striezelmarkt, Galerie Gebr. Lehmann, Dresden, Germany

This exhibition illustrates Vena’s stake in direct, painterly actions. The use of vinyl wall-reliefs, which are posited as both pieces and as backgrounds – literally wallpaper – for works hung on the wall, articulates an interest in elements of commercial signage and an abstraction of language. The horizontal lines forming Vena’s paintings and embedded in his vinyl stenciling are informed by a minimalist discourse, further exploring the work’s relation with Frank Stella’s Black Paintings.

Positioned atop Vena’s vinyl are two pieces composed of acid-etched mirrors. While referencing graffiti, Vena’s acid-etchings are indicative of stratified painterly gestures. Vena marks his mirrors, those looking upon the work, and the environment where the work placed, thus implicating the work, the viewer and the gallery with issues of violence.

Vena’s three rubber-on-linen paintings approach a similar interest in the potential for action in chemical reactions. While utilizing stencils, Vena’s paintings prioritize the ghosting left underneath the horizontal lines at the base of his paintings. This gesture, what Vena dubs “bruising,” moderates a discussion of the artist’s hand incised by mechanized processes.

Inflecting an interest in the reflective, Vena’s acid-mirror-etchings, rather than being looked into, and in accord with his aerosol rubber paintings and vinyl wall reliefs, reflect the gallery space in which they are housed, thereby reinvigorating discourses of critiques on viewership.

Over the past year, Ned Vena has had solo exhibitions at Midway Contemporary Art (Minneapolis), Max Hans Daniel (Berlin) and Michael Benevento (Los Angeles). In addition, he has participated in several group exhibitions at galleries and museums that include ‘Nothing to say and I am Saying It’ at Kunstverein Freiburg and ‘Black to Black’ at Kestnergesellschaft, Hannover, Germany. Ned Vena (b.1982) lives and works in Brooklyn, New York.