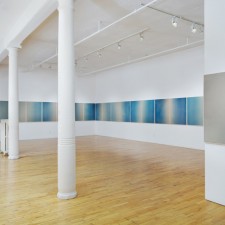 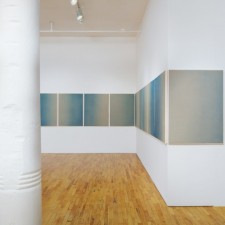 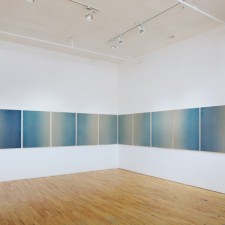 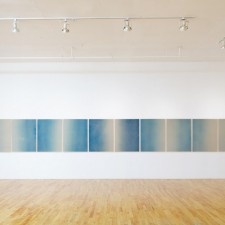 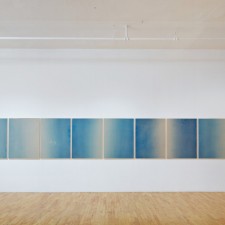 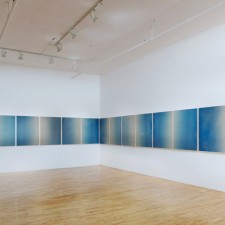 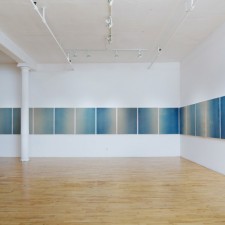 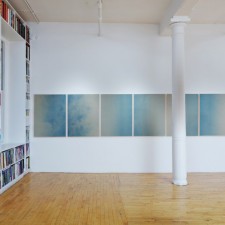 Clifton Benevento is pleased to present A Place In The Sun, the New York solo-debut of Toronto based artist, Hugh Scott-Douglas.

Drawing its title from the 1951 George Stevens’ film of the same name, A Place In The Sun, presents a new body of cyanotypes on linen.

Within cinematic history, Stevens’ film is regarded as a prime example of analog editing and is particularly well known for its long dissolves between scenes. Using the dissolve – an editing technique created by manually splicing and layering multiple frames from separate scenes to create a fade-in / fade-out effect – as a formal reference, Scott-Douglas creates a series of nearly identical 30 by 40 inch works using two overlaid negatives.

“Shot” over a number of afternoons using the natural sunlight outside the artist’s studio, Scott-Douglas introduces an element of chance. As the sun moves across the sky the amount of ultraviolet light reaching the work changes making the chromatic tone of each work unique. The installation presents these works – what the artist refers to as frames, rather than strictly photographs or paintings – as a single object, broken into equal parts.

Installed so the perimeter of each frame visually gestures to the adjacent frame and in turn creates a checkerboard motif, Scott-Douglas reiterates the formal notion of the dissolve and completes an almost self-effacing act that makes each frame a part of a larger mise-en-scène rather than an independent object. Positing Stevens’ film as a historical referent and the analog dissolve as a formal trope to connote the passage of time, Scott-Douglas advances his meditation on painterly abstraction and his co-option of an industrial process to create painterly effects through non-painterly means.