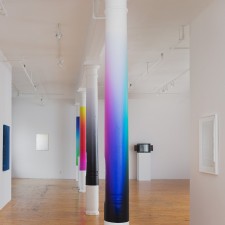 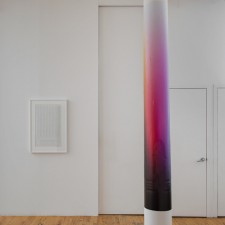 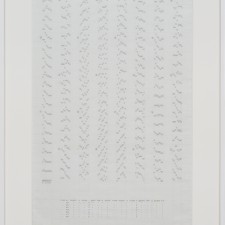 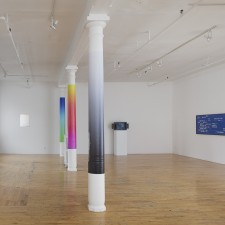 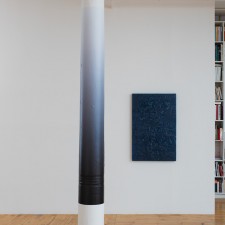 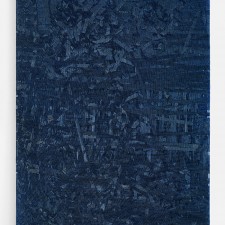 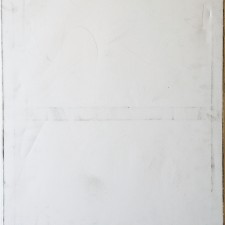 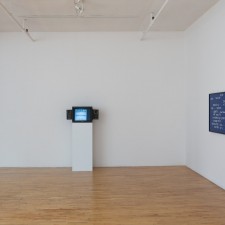 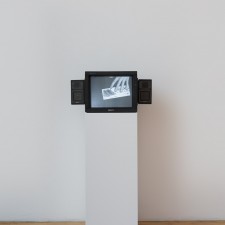 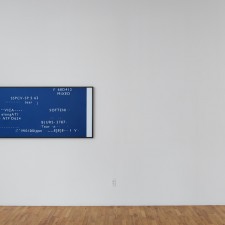 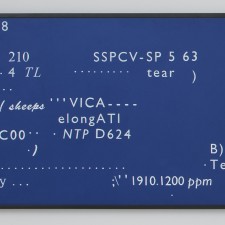 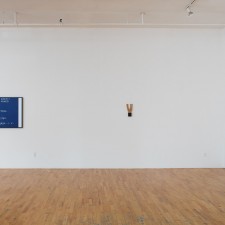 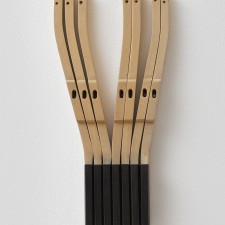 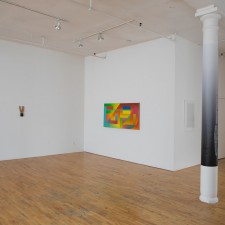 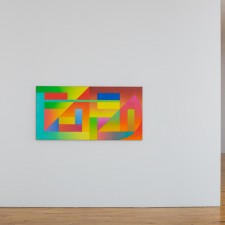 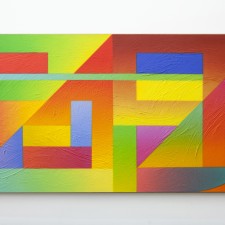 Clifton Benevento is pleased to present the group exhibition Figure 8, featuring eight works by eight artists that address materiality and its transformation of information and language.

Developed by Channa Horwitz (1932 – 2013) as a way to organize visually elaborate compositions, Sonakinatography is a code for time, rhythm and movement. Notational systems of numbers ranging from 1 through 8 express and translate unique arrangements while establishing their own visual language on 8-to-the inch graph paper. An alphanumeric logic informs the paintings of Mariah Dekkenga (*1978) in which numbers and letters mark shapes and colors in compositions created in Adobe Illustrator. The digital compositions are transferred by hand onto the canvas, fusing computerized color scales and painterly gesture. Mike Yaniro’s (*1980) Expanded PVC text panels encode information from Material Safety Data Sheets, primarily physical data relating to the material itself, into abstract language.  Hand-cut, hand-painted numbers and letters form an illegible grid of codes, and although self-referential, they have the appearance of commercial signage reticent to communicate.

For the video work BOOM (Fresher Acconci), Siebren Versteeg (*1971) developed an algorithm that generates a live stream of random Google image searches which are continuously aggregated into a video vignette. A constant varying sequence of images reflect the Internet’s shifting topography of information. Joshua Citarella’s (*1987) site-specific color gradients are generated through position-dependent color variables in Photoshop. The colors are mapped according to the gradient’s dimensions, assigning each color a unique coordinate within the physicality of the architecture. Karin Sander’s (*1957) Mailed Painting 168, Bonn-Berlin-New York, is part of a series of primed canvases that pronounce evidence of their transportation and travel. Never packaged or protected, the painting is always in display mode, whether in storage, transit or hanging on a wall.  While revealing the painting’s history, the surface is in a continuous position of transformation that never reaches a final state.

Zarouhie Abdalian’s (*1982) sculpture Every Instance (C#/D♭), 2014, comes from a series of piano key groupings. Representing a different pitch class (A-G), each work combines keys from the same piano. Silence becomes palpable as it transitions from a state of sound to a state of stillness and becomes mere object. Disuse gives way to silence in Luis Miguel Bendaña’s (*1988) work that combines VHS tape and custom machine-knit polyester. No longer prized for its ability to deliver content, VHS tape marks the decline of physical and analog film. Entwined within Bendaña’s knitted fabrics, the material lends a muted elegance to his assemblages.