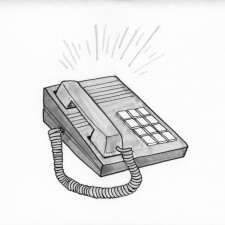 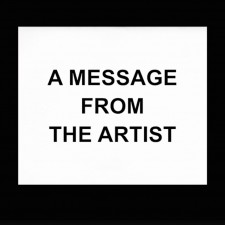 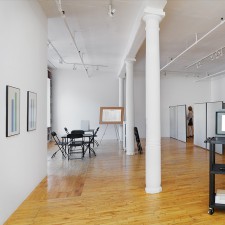 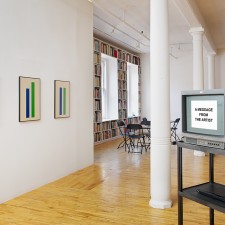 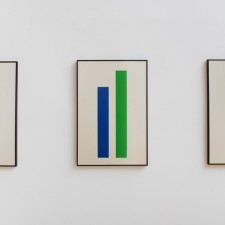 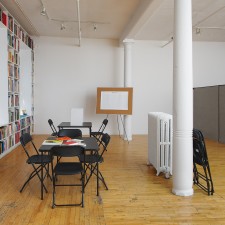 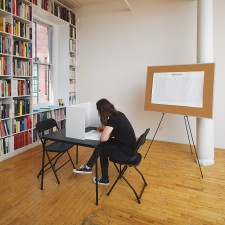 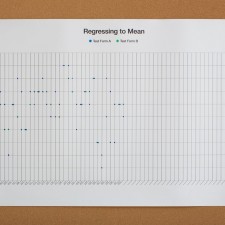 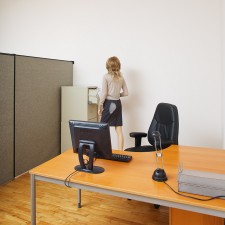 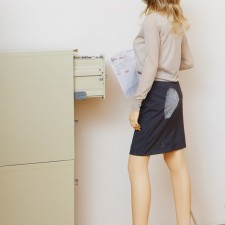 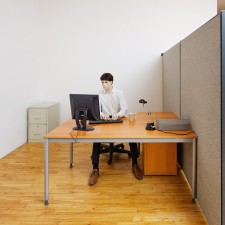 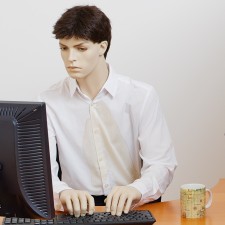 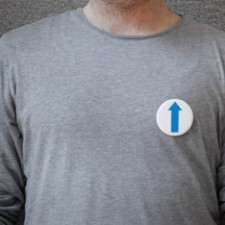 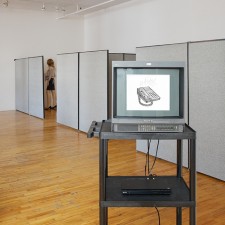 2002
A Show That Will Show That a Show Is Not Only a Show, curated by Jens Hoffman, The Project, Los Angeles, CA (collaborative project presented by “The Substitutes” with Melissa Longenecker)

Spring standardized testing season is upon us.  As many students across the nation are being assessed under new corporatized and computerized testing systems aligned with the Common Core State Standards, Clifton Benevento offers a more traditional more-than-one-choice, fill-in-the-bubbles, take-your-best-guess testing exercise.

On the occasion of her second solo exhibition at Clifton Benevento, D’Ette Nogle embraces the notion of the second-year syndrome or what some may attribute to the statistical occurrence of a regression toward the mean (RTM). Reusing structural elements from her first solo exhibition at the gallery, office partitions are re-installed and their configuration within the gallery remains the same [the content(s) differ(s)], Nogle invites the comparison of the two exhibitions and brings to the forefront the vulnerability of the artist’s practice to the intensified scrutiny, on behalf of others or the artist herself, associated with a second installment.  Utilizing these formal restraints, Nogle also addresses the importance placed upon perceived dynamic shifts in an artist’s practice.

In Nogle’s non-scientific testing exercise, test-takers take two brief 10-question tests, Form A and Form B. The test presents visual information, including two tableaus installed within the gallery, and two answer choices: A) true or B) untrue.  Upon receiving their results on both forms, the test-taker will determine if they: advanced toward the mean, regressed toward the mean, or maintained a consistent position in relation to the mean.  The visual information in Nogle’s test centers on the notion of schadenfreude, or pleasure derived from someone else’s failure or misfortune.

The incorporation of schadenfreude questions the motivation of value judgments on successive attempts and asks whether the projection of failure upon others is grounded in the statistical phenomenon of RTM or a desire within ourselves.  The subjectivity involved in responding to the test questions and the subsequent comparison between the test-taker’s responses and the answer key established by a gallery representative provides an opportunity to consider the set conditions that determine the value of art and affect what, by extension, is valued by others.

D’Ette Nogle was born in La Mirada, CA in 1974 and received her MFA from the University of California, Los Angeles. She has been featured in solo exhibitions at Clifton Benevento, Parker Jones, Room Gallery and L.A.C.E (all Los Angeles), and group shows at Romer Young Gallery (San Francisco), Circus and David Salow Gallery (both Los Angeles). Her work was featured in Made in L.A. at The Hammer Museum and Sonsbeek 9 in the Netherlands. She lives and works in Los Angeles.

The exhibition will run from April 19 to May 24, 2014; opening reception is Saturday, April 19 from 5-7pm. The gallery is located at 515 Broadway between Broome and Spring streets, New York; opening hours are 11am-6pm Tuesday through Saturday. For further details, please contact Michael at mc@cliftonbenevento.com or via phone at 212.431.6325.

Brienne Walsh, “Staving off the Sophomore Slump: D’Ette Nogle at Clifton Benevento.” Art in America online. May 12, 2014.
PDF OF REVIEW